A Brief History of GESS

In 1885, a school was founded in some shophouses in Tanjong Pagar by Mr Gan Eng Seng to offer free education to the children of poor parents in the vicinity. It was called the Anglo-Chinese Free School.

No school perhaps has had a more distinguished array of personalities connected with it than Gan Eng Seng School. Before it became a government school, it had on its Board of Trustees illustrious names as Tan Keong Saik, Ho Yang Peng, Wee Theam Tew, Lee Cheng Yan, Chan Sze Jin, Wee Swee Teow, Song Ong Siang, and Dr. Lim Boon Keng.

When in 1889, the Government gave the school a site in Telok Ayer Street for a new building, it was Mr Gan Eng Seng who put up the building. On 4 April 1893, the new building was officially opened by the Governor, Sir Cecil Clementi Smith.

English and Chinese were taught at Gan Eng Seng School until the founder’s death when it became a purely English School. Then, owing to financial difficulties, it no longer functioned as a free school and for some time fees were charged.

In 1937, the Board of Trustees, owing to financial difficulties, was not in a position to carry out major and urgent repairs to the school premises. Therefore, in the interest of the school, Gan Eng Seng School became a Government school in 1938.

In 1939, the construction of the new Gan Eng Seng School Building at Anson Road could not begin as the shadow of war soon halted developments of any kind. Alternative accommodation was hard to find, but eventually the Education Department decided to house the school temporarily in the Sepoy Lines Malay School in Park Road.

When the school re-opened on 8 September 1941, teachers and pupils settled down to their normal duties, quite unaware of the impending clouds of World War II. On 5 December 1941, the school broke up for the Christmas vacation, but was destined not to meet again until four and a half years later. Soon after the outbreak of the war with Japan, the Sepoy Lines Malay School was requisitioned.

When the Japanese Occupation ended in 1945, attempts to resuscitate the school immediately were not successful. Many of the old members of the staff were assigned to other schools which were fortunate enough to be able to re-open.

Finally, in May 1947, the school succeeded in getting the Japanese School building in Waterloo Street where it functioned until it shifted to Anson Road in 1951.

In 1986, Gan Eng Seng School moved to a new site at Raeburn Park. The school’s founding site at Telok Ayer Street was designated as a national historical site by the National Heritage Board in 1997.

In 2001, the school relocated to its present site at 1 Henderson Road. Recent years have seen it launch its inaugural Founders’ Day (2012) and the GESSOSA Student Development Fund (2015). It even made the Singapore Book of Records in 2019 by completing 102,000 squats in 5 minutes, and was chosen as one of only 27 pilot schools to undergo the Full Subject Based Banding (FSBB) trial in 2020. 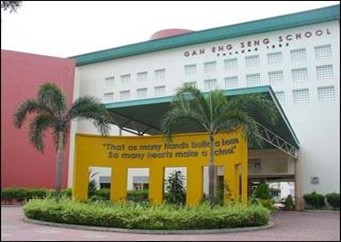 Our current building at 1 Henderson Road